Congratulations to this year’s Nobel Peace Prize laureates, the members of the International Campaign to Abolish Nuclear Weapons (ICAN)! This organization, which successfully led fifty nations to sign the United Nations Treaty on the Prohibition of Nuclear Weapons in September, fulfills many of the ideas and obligations expressed in Alfred Nobel’s last will and testament. These include disarmament and greater cooperation between nations, both having been strongly advocated by Bertha von Suttner as she created and promoted pacifist societies throughout Europe in the 19th century. Today, ICAN continues to work toward a more peaceful world free of the specter of nuclear armageddon. Beatrice Finn, ICAN’s executive director, said of the recent UN treaty, “This is what a real step looks like. And for our shared human society, this is a step for the better.” 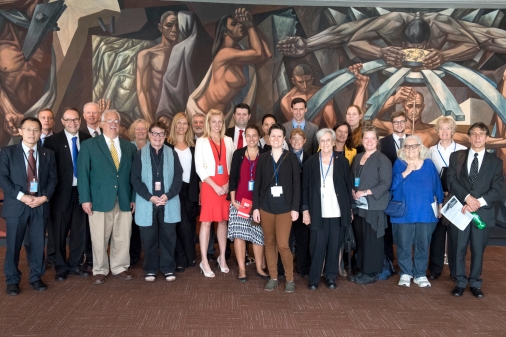 Supporters of the UN treaty gather together on the day of its passage. (Photo courtesy of ICAN)

At a meeting in Zurich with Suttner in 1891, Nobel predicted, “On the day that two army corps can mutually annihilate each other in a second, all civilized nations will surely recoil with horror and disband their troops.” As we are now painfully aware, the development and deployment of nuclear weaponry did not result in a world liberated from the constant threat of war. Instead, the idea of nuclear deterrence has become a cornerstone of foreign policy for many weapons-rich nations, leaving the world’s citizens fearful of irrational leaders with itchy trigger fingers.

The recent mass shooting in Las Vegas also reminds us that man’s hunger for more and more powerful weapons continues unabated on the individual as well as the international level. (I’ve used the gendered word intentionally, as the majority of most mass murderers and terrorists are, by far, male.) In the United States, the proliferation of automatic and semi-automatic guns, along with the devices that can transform one into the other, have led to a citizenry that lives in constant dread of the next attack. News reporters exacerbate our anxieties by documenting how global terrorists have “weaponized” everything from automobiles to social media posts.

In the 1890s, anarchist bombings throughout Europe created a similar sense of panic in many cities, especially Paris, where Nobel maintained one of several homes. An explosion at the Café Terminus near the opera house targeted civilians for the first time in a symbolic attack on the bourgeoisie. (For more on this, check out John Merriman’s deeply researched and suspenseful book, The Dynamite Club: How a Bombing in Fin-de-Siècle Paris Ignited the Age of Modern Terror.) 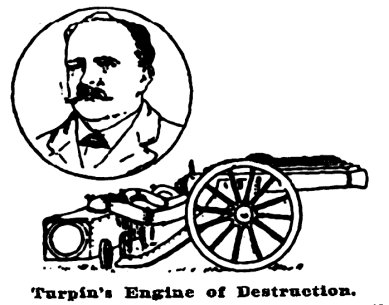 New York Times artist’s rendition of Turpin’s machine, described as “a wonderful invention” by the newspaper.

Several years later, French residents received a shock of a different kind when the explosives manufacturer Eugene Turpin announced his invention of a doomsday machine that could destroy all of Paris within the course of an hour. Turpin envisioned mounting his “engine of destruction” on a locomotive with ammunition-filled railroad cars trailing behind. With its rotating rapid-fire cannons, this so-called “Angel of Death” could discharge 25,000 poison-filled projectiles and obliterate everything within 22,000 square meters.

We might imagine that peace-seeking idealists of the day would have been horrified by this proposed weapon of mass destruction. On the contrary, Suttner wrote to Nobel, “What is your opinion of Turpin’s machine? This invention fills me with joy, for if it delivers what its inventor promises, it would make war almost impossible. Yet…I would have preferred that you had invented it.” Nobel dismissed Turpin’s plans as impractical “balls of soap” but went on to praise its inventor’s imagination. Somewhat annoyed, Suttner wrote back to clarify her position. “If you had invented such a machine,” she told Nobel, “it would have been for the sole purpose of rendering war impossible. But Turpin and his friends weren’t thinking of peace; they wanted to act like treacherous parasites and use their infernal machinery to profit from the fears and prejudices of the day. What a blessing that they have not succeeded!” 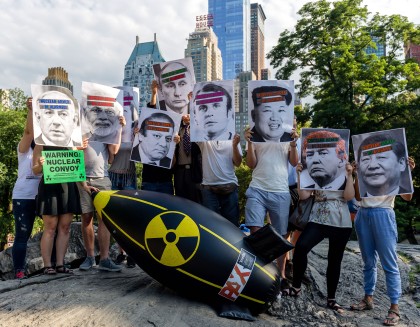 Protesters in New York City’s Central Park prior to the UN treaty adoption in September. (Photo courtesy of ICAN)

Today we celebrate ICAN’s success toward rendering nuclear war impossible. In announcing this year’s Peace Prize, the Nobel committee noted, “We live in a world where the risk of nuclear weapons being used is greater than it has been for a long time. Some states are modernizing their nuclear arsenals, and there is a real danger that more countries will try to procure nuclear weapons, as exemplified by North Korea. Nuclear weapons pose a constant threat to humanity and all life on earth. Through binding international agreements, the international community has previously adopted prohibitions against land mines, cluster munitions, and biological and chemical weapons. Nuclear weapons are even more destructive, but have not yet been made the object of a similar international legal prohibition.” We can hope that the symbolic support of the Nobel Peace Prize will help ICAN and all of the UN treaty’s signatories achieve that prohibition.

Click here for more information about the International Campaign to Abolish Nuclear Weapons.