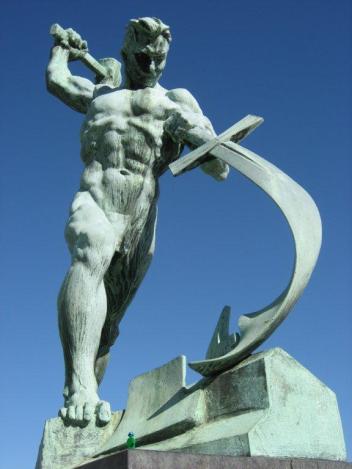 “Let Us Beat Our Swords into Ploughshares,” a sculpture by Evgeny Vuchetich presented to the United Nations in 1959 and on display at its headquarters in New York City

God shall judge among the nations, and shall decide for many peoples: and they shall beat their swords into ploughshares, and their spears into pruning hooks: nation shall not lift up sword against nation, neither shall they learn war any more.
—Isaiah 2:4

For decades now I’ve looked to the literary journal Ploughshares as a symbol of the positive influence that writing can have on establishing a more just and peaceful world. Derived from the biblical quote above, the publication’s name refers to the constructive and creative application of the tools crafted to help civilize the world, language and literature among them.

With that clearly in mind, I submitted the first excerpt from Peace at Last, a chapter entitled “Koppargruva,” to the editors in the hopes that it might find a meaningful home there. I’m ever so thankful that it has.

This conflation of good and evil, construction and destruction, haunted Alfred Nobel throughout his life and features prominently in this excerpt. His patented applications of explosives (nitroglycerin, dynamite, and gelignite most notable among them) led to incredible advances in the mining and railway industries and, in so doing, helped to transform the world at an unprecedented rate. However, military applications of the same technology, at first held at arm’s length by Nobel, caused death and destruction at similarly unprecedented levels.

Throughout his life, Nobel considered ways to balance the destructive power of his explosives with more constructive and unifying pursuits. Working together with Bertha von Suttner, he funded pacifist societies throughout Europe and eventually, also at her insistence, endowed the peace prize that now bears his name. For him, this represented one way to establish a more progressive and positive legacy despite society’s depiction of him as a “merchant of death.”

“Cannot swords be turned to ploughshares?” Ronald Reagan asked in his address to the 42d Session of the United Nations General Assembly in New York City nearly a century later. He continued, “Can we and all nations not live in peace? In our obsession with antagonisms of the moment, we often forget how much unites all the members of humanity. Perhaps we need some outside, universal threat to make us recognize this common bond. I occasionally think how quickly our differences world-wide would vanish if we were facing an alien threat from outside this world. And yet, I ask you, is not an alien force already among us? What could be more alien than war and the threat of war?”

These questions and concerns, debated for centuries, still trouble society today. They can inspire us toward aspiration and optimism just as easily as they can lead us to despair and cynicism. They’re the motivation behind my devotion to Peace at Last, for in Alfred and Bertha I see both sword and ploughshare. They’re also at the core of the moral crisis depicted in “Koppargruva,” one of the early “Nobel” chapters from the book.

The Ploughshares “Solos” version of “Koppargruva” is now available directly from the Ploughshares Web site (https://www.pshares.org/solos/koppargruva-solo-52) and can also be purchased and downloaded via iBooks (Apple iTunes) and Kindle (amazon.com, where it’s a dollar more for some reason).

The title can also be found on kobo.com, where new registrants are frequently treated to an instant $5 credit. Might I suggest adding Bertha von Suttner’s Lay Down Your Arms ($2.99) to your cart along with “Koppargruva”? You’d still have two cents left to put toward another purchase… 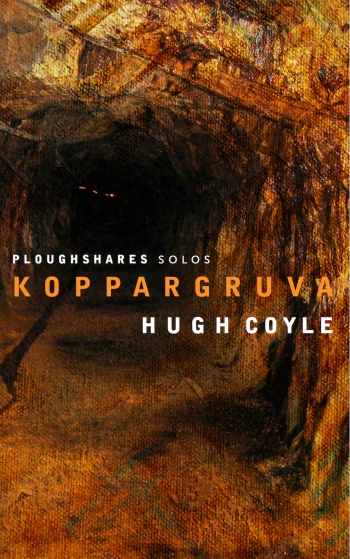 The first excerpt from the novel, “Koppargruva,” is now available for download as part of the Ploughshares “Solos” series. Here’s a slightly amended description from the journal’s Web site:

“Alfred Nobel, inventor of dynamite and inspiration for the Nobel Peace Prize, visited the United States twice. ‘Koppargruva,’ from Hugh Coyle’s forthcoming book Peace at Last, is a fictionalized account of one of those excursions. Dubbed a killer by American journalists because of recent accidental nitroglycerin blasts in Panama and San Francisco, Nobel faces his tarnished reputation head on while searching for any sliver of redemption.”

The Solo includes a question and answer section following the excerpt in which I discuss the evolution of this particular chapter as well as the novel itself.

In the days ahead, I’ll be posting more information about “Koppargruva” and explain why it means so much to have it appear in Ploughshares. I’ll also provide links for interested readers to download the book via various digital platforms, such as Amazon and iTunes, once they are available. For now, you can purchase and download a copy (suitable for either Kindle or iBooks) on the journal’s Web site here and/or subscribe to the entire “Solos” series of publications, which features ten titles per year: https://www.pshares.org/solos/koppargruva-solo-52

Feel free to send along any questions you might have about this particular chapter as well. I’d be happy to answer them as much as possible without giving away too many details and surprises from the rest of the book!